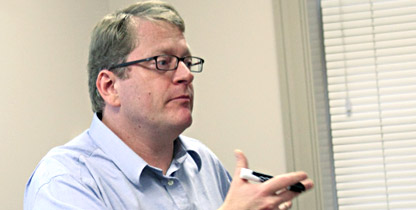 Geoffrey Williams took an unusual path to becoming an economics professor. He began his education in acting school at New York University, where he earned a B.F.A. degree before moving on to graduate programs in economics.

“Ironically, I was kind of afraid of school,” he says. “I was intimidated by the discipline of college, so it was an easy way out. So I’m sympathetic to the students who are having a rough time, but I also really want them to pull it together.”

He says if he had it all to do over, he would have focused more on math in college. Even so, that acting experience gave Williams some of the teaching skills he uses today, like presence in front of an audience and self-confidence to tackle any sort of presentation.

“A lot of the teachers here, actually, remind me of acting friends of mine. You’ve got to communicate well, and you’ve got to have a certain persona.”

Williams conducts research on crime and social policy, using economic models and tools to try to understand why people commit crime. Lots of research argues that crime is based mostly on income level, but Williams believes that it’s just as much, if not more, behavioral. In the research he’s done, measures of impatience and self-control seem to be much more powerful than measures of income or economic situations.

This has gotten him interested in the role that early childhood health and education play in long-term lifetime outcomes, and the surprising impact of some policies. For example, some researchers argue that when the government mandated that lead, a highly toxic substance that inhibits brain development in children exposed to it, be removed from gasoline in the 1970s and 1980s, it caused a reduction in the national crime rate.

“What happens in the first couple years of life is incredibly important, and that’s one of the reasons early childhood stuff is so interesting to me. Even if someone comes from a low-income background, there are things you can do to set those traits.”

It’s a concept Williams tests daily with his two-year-old son.

“Definitely part of my interest in early childhood issues comes from being a father.”