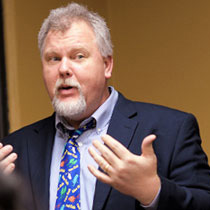 Gary Deaton has always been a performer, or at least since he was in first grade and was sent home for dancing on a cafeteria table. “The dance wasn’t very good,” he recalls, laughing.

But instead of taking his talent on stage, in front of a television camera, or behind a microphone, Deaton ended up in the classroom in front of an “audience” of students who care more about learning than being entertained. Now, the writing, rhetoric and communication professor and program director is logging his 24th year at Transylvania, and he credits his successful tenure to being able to do both—teach and entertain.

“My philosophy is that teaching is about engagement and that the worst model of teaching would be, metaphorically, a fliptop head where you unzip the head of the student and pour in information,” said Deaton, who is also head of the university’s successful forensics program.

So how does he engage (entertain) his students—WRC majors, yes, but also students from all disciplines—while he is also teaching?

“The best learning is going to happen through the interactive process. Even when lectures are necessary…even when they’re not talking, they need to be engaged in the material,” he says. “I try to pick texts and readings for classes that will help create that engagement and make people want to talk about what we’re reading.”

Texts such as novels by cultural critic Kurt Vonnegut and Neil Postman for the Foundations of the Liberal Arts courses he teaches. And the New York Times for the Rhetoric and Elections he co-teaches with WRC colleague Scott Whiddon. In many of his classes, Deaton starts with a question—one he comes up with or one he has a student design—and lets the conversation flow from there.

“It’s all about asking good questions,” he says.

Inserting a little comedy into his everyday teaching routine also provides some entertainment value. Deaton is even working on a course that would be centered on comedy called Communicating Humor.

“I’ll talk about standup, improvisational, sketch comedy, situation comedies. When does comedy work and when does it fail; when is it good for culture and when is it bad for culture. Why are things funny and why they’re not. I think that will be a lot of fun,” he says.

Recognized for teaching excellence by the Kentucky Communication Association (1994)

Recognized for Outstanding Service by the Kentucky Communication Association (2002)