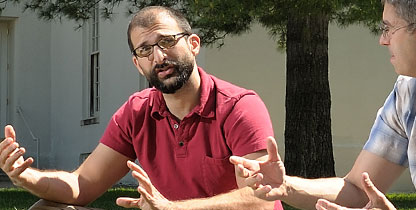 What’s so important about teaching history to Transylvania students?

History is the study of human experience—it links the past to the modern world by investigating culture, politics, the economy, and much more. It gives us a clearer picture of who we are and how we got here.

Greg Bocketti has seen countless history students ponder those big questions and move on to become not only historians and teachers, but medical practitioners, bankers, lawyers, and insurance agents.

“History asks students to think with all the parts of their personalities—with all their senses as economic, political, social, and cultural actors,” he says. “It asks them to understand people with experiences outside their own. The protagonists of history are actors in the past, whether in this country or others.”

Bocketti’s research interest is in Latin American history, and he teaches unique courses related to that field, including History of Brazil, Sport in Latin America, and Public Celebration in Latin America. He encourages his students to explore those subjects in a thoughtful way, and it shows in their work.

“Students have helped me clarify my thinking about historical subjects, which has made me a better writer and better historian, asking new questions and thinking more deeply about the significance of my work. I especially enjoy reading students’ work and hearing students’ ideas about the subjects we study, because I always learn from them.”

As Bocketti points out, Transylvania students of history have the opportunity to “work with teachers who are active in the field and engaged with the same set of challenges students face—working with sources closely, thinking about historical questions, and honing their critical writing skills.” For his part, Bocketti wants to help his students develop their “habits of thinking,” as well as their research and communication skills.

And if they happen to find the answers to some of those big questions along the way, perhaps we’ll all have a better understanding of the conflicts and complications that shape this human drama.

Bingham Award for Excellence in Teaching, 2014–19

The Invention of the Beautiful Game: Football and the Making of Modern Brazil, Gainesville: University Press of Florida, 2016

“Narratives of Loyalty and Disloyalty in the Migration of Professional Footballers: Argentina, Brazil, and Italy in the 1920s and 1930s.” In Stefan Ranke and Christina Peters, eds., Global Play: Football Between Region, Nation, and the World in Latin Amer