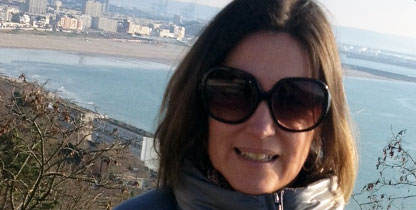 Her current research addresses the emergence of a “fat identity,” which philosopher Michel Foucault would argue indicates that society has taken notice and wants to assert some control over those whose bodies are classified as “overweight” or “obese” according to current norms. Cox hopes to develop a course that will address, in part, the political fallout from the nascent “war on obesity.”

In these sometimes emotionally-charged classes, Cox works hard not to let her personal opinions direct the discussion. Everyone in the room looks to the original source—the text they’re reading—as the authority.

Philosophy is kind of a secret weapon. Students who figure it out realize it’s training them to think. And that’s a non-discipline specific skill they’ll be able to use in law school, medical school, or the business world.

“My primary goal as an educator is to teach students to read.”

Cox finds the courses she teaches in women’s studies or sexuality studies the most rewarding. She values the chance to help students consider the “biases or privileges that might make their points of view alienating to those with different life experiences.” Sometimes she finds it necessary to remind students of ways they may be disenfranchised.

Teaching these subjects has been a learning experience for her, too. She now feels “a sort of political responsibility, an ethical commitment to the things that I’m teaching in those areas.”

Students leave Cox’s classes ready to tackle all sorts of contemporary issues. Philosophy students typically enjoy academic challenges, and many decide to pursue advanced studies in medical school, law school, or other graduate programs. Others will prepare for careers in business, teaching, or public policy.

Cox appreciates that her academic and personal interests are sometimes folded into new courses at Transylvania. In 2011 she and philosophy professor Peter Fosl took a group of students to Paris to study the philosophy of food.

Students looked at how where you live and what you eat affect your life philosophically. They also discussed how cultures, cities, historical figures, and even philosophical theories have become consumable commodities. “We talked about consumption both as a metaphor and also in the literal sense of French cuisine.”

Given Cox’s affection for French literature and French food, it seems likely the students had the opportunity to savor some petites madeleines, those magical treats that made writer Marcel Proust reflect so eloquently on consciousness and memory and the philosophical state of one’s mind. For Cox, that would result in the perfect melding of academic enlightenment and gustatory joy.