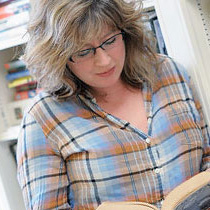 We may have shed the sartorial layers of the Victorian era, but Liz Corsun deftly reminds us of how much our cultures have in common. She recognizes how even more is to be gained by exploring the significance of their stories and the complexities of the era that we inherited.

When asked what first captivated her about 19th century literature, Corsun replies, “I was hooked by the narrative, but then stuck around because of its relevance—as a key to understanding our current time.” She sees similar opportunities for her students.

“I tell my students that literature is a reflection of the human condition. It’s a way of understanding your own moment and of being able to act purposefully.” She wants them to ask the big, often uncomfortable questions, as the Victorians did, and to identify and analyze patterns, make connections and then determine a course of action.

There are reasons Corsun professes to being a big fan of the Victorians. “They really worked hard to articulate values, create structures and make substantive legislative changes that protected vulnerable individuals,” she says. And, of course, they wrote extraordinary literature.

Corsun notes, however, that they also participated in oppressive colonial practices and frequently promulgated racist and sexist ideologies. Learning about, and from the past, requires as clear-eyed an assessment of it as possible. The challenges of the 19th century, like our own, generated an array of literary texts that tell complicated stories about difficult situations.

“The 19th century shaped these compelling, complex narratives that were designed to hook the reader, so they have this pacing, momentum and drama that I find really immersive,” she explains. They also, however, address issues of inequality, corruption, illegitimate power, individual agency and redemption. She sees some of today’s television serials—“The Wire,” “Game of Thrones” and “Mr. Robot”—as analogs of the Victorian novel, with their numerous characters, multiple subplots, interwoven themes and longer form narratives. “They meet similar needs,” she observes.

For Corsun, it’s this conversation across centuries and between professor and students, that constantly invigorates her. “We go through it together,” she explains, finding excitement in the open exchange of ideas, thinking together, and reaching clarity (as much as possible) in the process.

“You need that kind of intellectual energy,” she says, in order to act meaningfully. Ultimately, “understanding the relationship between the past and the present is crucial for determining the future.”

Review of Utopian Literature and Science: From the Scientific Revolution to Brave New World and Beyond by Patrick Parrinder in Science Fiction Studies, Vol. 44, No. 1 (March 2017), pp. 183-185.