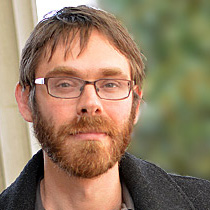 Everybody has a decent background in philosophy; they just don’t know it.

At Princeton University, the Ancient World intramural team reigns as the dodgeball and 3-on-3 basketball champs. The team members put up a noble fight during indoor soccer season. And ultimate Frisbee? Well, perhaps that’s their Achilles’ heel.

As a graduate student, David Kaufman was a member of the team for six years. Was his commitment to those physical tests an opportunity to try on the ancient warrior code? A way to earn respect? Prove himself on the battlefield? Impose some meaning amid the savagery of life? Ensure his own fleeting existence has some timeless significance?

Nah. It was just fun.

But Kaufman thinks studying the ancient world and its literature gives students an opportunity to, in a sense, test their own moral code, their own beliefs, the philosophy or worldview they’ve adopted sometimes almost by default. After all, it might not be surprising that 2500 years ago people held some views very different from ours.

As Kaufman explains, “The goal isn’t that students will embrace those views. But it might lead them to think a little harder about why they embrace the views they do.”

And these studies inevitably raise the big questions, the questions we all think about although we may never formalize them.

These are the questions that philosophy investigates. “In a philosophy class, we take up those questions and explore them in a more complicated, nuanced way, a more open-minded way. Students are exposed to the questions all the time. It’s just a matter of how you go about approaching them—through other texts and through a long history of people contemplating them.”

Kaufman’s goal is to get students to engage while they’re in class, so they can benefit from hearing the views and interpretations of others.

“You want to have an environment where people feel comfortable asking questions, suggesting interpretations.

“What’s exciting about being a scholar is that you’re looking at texts that people have been trying to interpret for 2500 years. There’s still a lot that’s new to say about it. You actually have a contribution to make to the interpretation of these texts.”

So what is Kaufman’s advice to his students? Actively grapple with what you read. See how it applies to your life. See if it sparks any new insights you’re willing to share with your classmates. Listen carefully to their interpretations, especially if they introduce a viewpoint you hadn’t considered.

And during this process, this freeing of your mind, you may just find you’ve become a liberally educated citizen.

“Seneca on the Analysis and Therapy of Occurrent Emotions” in Trends in Classics: Seneca Philosophus, edited by M. Colish and J. Wildberger, 2014

“Galen on the Therapy of Distress and the Limits of Emotional Therapy” in Oxford Studies in Ancient Philosophy, Vol. 47, 2014