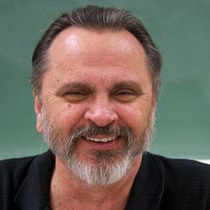 Political science professor Don Dugi’s proficiency in the classroom can be attributed in part to the fact that he’s been teaching most of his life. At the small rural Texas school Dugi attended as a child, each teacher was responsible for two classes, prompting them to ask bright students like Dugi to assist their peers. At St. Mary’s University, where he completed his bachelor’s and master’s degrees, Dugi was influenced by the personalities and techniques of many fine professors whom he encountered in small class settings.

“If your model for teaching is taking a survey course with 600 people and having a talking head professor and teaching assistants who lead your discussions, how can you know anything about effective teaching?” Dugi asks.

Dugi has been practicing effective teaching at Transylvania since 1975. His expertise was recognized in 2003 when he was named Kentucky Professor of the Year by the Carnegie Foundation for the Advancement of Teaching and the Council for Advancement and Support of Education.

In Dugi’s classroom, students are not passive learners, sitting silently and absorbing what their professor says. Assignments and discussions compel students to take an active role in their own education.

“One of the old models for teaching is the jug model, where students are viewed as vessels to be filled by someone else,” says Dugi. “I think that’s totally bogus. People are going to learn more when you help them own it rather than when you just give them stuff.”

Dugi’s influence on his students reaches far beyond the classroom. His month-long workshop to prepare students for the law school admissions test and application process has helped Transylvania students gain admission to top law schools, including Harvard, Stanford, Duke, and Columbia. Every student that Transylvania recommends to law school is accepted.

Additionally, Dugi has served as Student Government Association advisor, sponsor for both the College Democrats and College Republicans, and supervisor of Transylvania’s legislative internship program.

Fellow faculty members also have benefited from Dugi’s leadership, most notably through his three-year Bingham-Young Professorship, which created opportunities for faculty members to investigate the concept of race as both an intellectual and pedagogical concern. The program ultimately influenced both individual teaching and course offerings.

Dugi says he doesn’t have a teaching philosophy. “I have a code, and my code is to leave people in a place better off for my having been there,” he says. “Not in a delusional way, but in an objective way.”

2003 Kentucky Professor of the Year Award from the Carnegie Foundation for the Advancement of Teaching and the Council for Advancement and Support of Education
Bingham Award for Excellence in Teaching
Bingham-Young Professor, 1999-2002