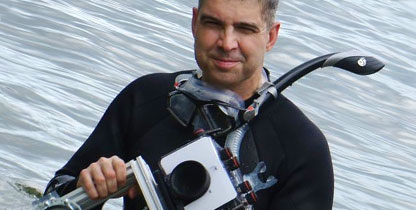 Chris Begley isn’t one to sit idly by while other researchers have all the fun.

Begley carries out archaeological digs in both the United States and abroad. Recent excursions have included documenting items from Mediterranean history off the coast of Spain, exploring the legend of the lost civilization of the Mosquito Coast in the jungles of Honduras, and studying prehistoric caves in Missouri.

He is a firm believer that only a part of education happens in the classroom, and he routinely takes students on his digs, using the research in his curriculum.

“I try to let them see the whole process, to see how they could do this when it comes their time,” Begley says. “Sometimes they get to excavate, sometimes they get to do whatever kinds of field work we’re doing. They get to interact with local scholars, which I think is really important, so see that wherever you go, there are a whole lot of dedicated experts that are doing great work.”

Much of Begley’s recent research has been with a groundbreaking three-dimensional scanner he has helped to develop that can be taken on rigorous expeditions. It’s lightweight, and its energy consumption is so low that it can go several days without needing a charge. It doesn’t require a computer to store the images, so the files can be sent off later and processed. It’s also waterproof, so it can be used on dive sites.

“I think this is really important for archaeologists and any other field researchers that need accurate 3-D maps of objects they’re going to take in hostile environments,” Begley says. “What we’re envisioning is a system where archaeologists could buy the equipment cheaply, take the data, and send off what you want to be processed. I see a lot of potential for that in places like Honduras that don’t have a lot of resources.”