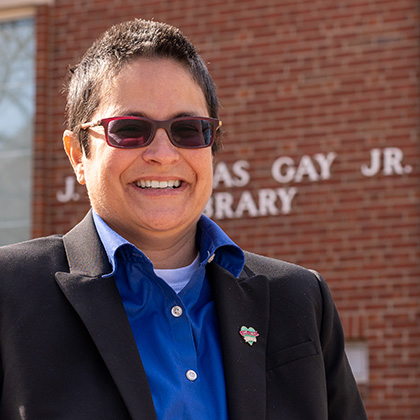 I believe teaching is something that constantly evolves and is as much about learning as it is teaching.

Depending on your background, you may think that studying religion entails pouring over ancient manuscripts and debating philosophy or interpretation of the written word. Or, given daily headlines, you may think more about violent conflicts between religious sects and the desperate implications for affected communities.

Religion professor Carole Barnsley’s education and interests make her a perfect partner for students wanting to explore these subjects. In one of her religion classes, students study the Quran so they can better understand the context of revelation and prophecy, as well as the variety of ways the text has been interpreted since its revelation. Another class might delve into the roles of women and men, paying attention to the ways male perspectives have dominated many areas of formal discourse, but also noting dissenting voices of women often disguised in other forms of expression. Students could also choose to study Buddhist teachings and traditions or Hindu practices.

Dr. Barnsley gently guides students as they explore these belief systems and unravel the mysteries. She is particularly interested in Asian and Near Eastern traditions, whose influences reach around the world. She loves working closely with students, nudging them out of their comfort zones and into new areas of study. And she is fascinated to see where her religion students end up: in law school, teaching English in China, entering the field of social work, or working in the ministry.

“I love working with students, both in the classroom and in extracurricular activities. They provide an excellent audience for new ideas and are a ready group of critics,” said Barnsley. “I enjoy the give and take of the process.”

Bingham Award for Excellence in Teaching