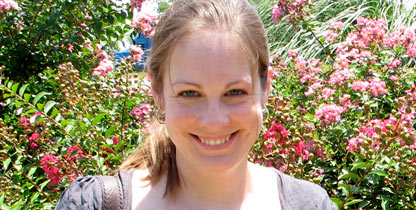 Some students may find 16th- and 17th-century literary texts somewhat impenetrable. The language and historical references are unfamiliar. The texts are sometimes long and dense.

Bethany Packard has adopted a lively approach to studying works from this period that helps students enjoy a deeper understanding of the texts.

I love the energy and reciprocity of a really good class.

Whenever possible, Packard incorporates performance concepts and techniques into her classes. For example, her students rarely sit idly in class as they discuss a play such as The Merchant of Venice. Instead, she assigns the students roles and asks them to memorize a critical scene. The students then learn the blocking necessary to set up the action. Through a brief performance, the students immerse themselves in the language and the scene, enacting the physical encounters of the players.

Packard believes that this “interpretation through performance” helps eliminate the foreignness of the material and introduces an immediacy that allows the students to better grasp the narrative, the characters, and their motives. Watching her students experience an “ah ha” moment during these performances reinforces her belief in “the importance of audible, visual, even physical engagement with a text.”

Packard also tries to reinforce the value of what she calls close reading. “Close reading means a focused analysis of language—word choice, figures of speech, tone, and more.” Once mastered, this skill helps students “recognize that there is no right answer, but rather a range of interpretive possibilities.” This improves the students’ confidence in their own analytical abilities, which carries over to their other courses.

This skill can be particularly helpful when studying 16th- and 17th-century texts, which “often contain very different, even paradoxical, points of view,” sometimes resulting in “frustrating, dazzling multiplicity.” This is in part what initially drew Packard to the literature of this period, but it can also add complexity to the study of these works. Packard offers her students “critical, historical, and theoretical contexts” to help them untangle the various threads of the piece.

Packard also emphasizes the value of research in her classes. She particularly enjoys archival research, where she handles “400-year-old books and manuscripts and reads 16th-century marginal notes or family letters.” To share this affinity with students in a Renaissance literature class, Packard encouraged them to use easily accessible tools like Early English Books Online (EEBO) to compile their own miniature archives of primary sources.

Packard understands that studying 16th- and 17th-century texts can be arduous, but putting in the hard work brings them alive. If you make the effort to understand the historical context and then physically put yourself in the action, you may find the texts feel very familiar

Mellon Visiting Research Fellowship in Renaissance and Early Modern Studies at the University of Warwick, 2009

Review of “Teaching Shakespeare and Marlowe: Learning versus the System, by Liam E. Semler.” Marlowe Society of America Newsletter. 34:1. Fall 2014