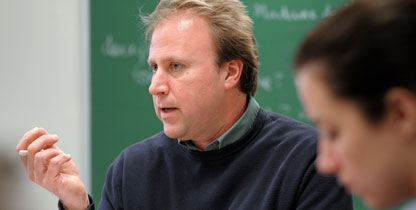 Teaching in France and in the former Czechoslovakia taught me to be attentive to the needs of particular groups of students. I became skilled at changing gears, being versatile, and trying different approaches.

It’s a gray morning in Paris as Brian Arganbright waits with anticipation outside the Bibliothèque nationale on the Rue de Richelieu, the home of the National Library of France since 1868. Arganbright arrives before the library opens to secure one of the limited seats that gives him access to thousands of non-circulating books. Eight hours pass and Arganbright barely notices, relishing the intensely studious atmosphere as he does research for his year-long Chateaubriand fellowship, awarded to him by the French government.

A specialist in the history and literature of nineteenth- and early twentieth-century France, Arganbright has a surprisingly flexible approach to teaching literature.

“I tell students not to worry if there’s a passage that’s difficult to understand. It’s not about reaching total comprehension. It’s about the process and enjoying literature.”

Arganbright aims to help students make connections across disciplines and between literature and their own life experiences—rather than teaching one fixed interpretation of literary texts.

Teaching in various cross-cultural settings has also trained him to adapt to the personality of each classroom. He has taught in universities in France and in the former Czechoslovakia, where he was a Peace Corps volunteer for three years.

“For my French or Slovak students, I could have had the best lesson plan, based on the latest research in second language acquisition, but it wouldn’t work because there were certain approaches that just didn’t fit the students,” he says. “I had to be willing to adapt quickly and creatively if something was not working.” Now, researching French pedagogy is a long-term career objective for Arganbright.

Whether he teaches an entry-level French course or senior seminar in literature, Arganbright finds satisfaction in watching his students’ progress.

“It’s amazing to see new students start with no knowledge of French, and by the end of French I they’re having 20-minute oral exams. By the end of French III, their linguistic skills are really quite strong. Our advanced students are reading some of the most important works in literary history, entirely in French.

“I am very proud of our students and of what they achieve at Transylvania and abroad. They have always been strong applicants for highly competitive research, internship, and job opportunities.”

Arganbright believes that learning French—the second most commonly studied language in the world—provides a richer understanding of complex international issues. It also gives access to new cultures beyond France.

At Transylvania, students can take francophone literature classes that represent a myriad of perspectives among French speakers living in the Caribbean, Africa, and the Middle East. “It’s a language of the world, not just Paris.”

Co-author of workbook and laboratory manual for Débuts: An Introduction to French (McGraw-Hill, 2003)