Get updates on Healthy at Transy, our campus reopening plan. 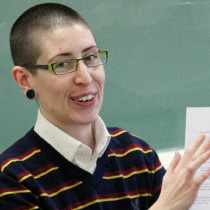 I don’t want to be the authoritative person in the classroom. My favorite classes are the ones where I get to facilitate and step in as needed. The classes are there for the students. It’s not my soapbox.

The first thing you notice about Avery Tompkins is his energy. He exudes enthusiasm. Perhaps that comes from the many hours he’s spent hiking the Appalachian Trail (around 750 miles so far). Or perhaps, as a self-described “teacher/scholar/activist,” he is simply accustomed to juggling multiple roles and shifting his energies from one task to the next.

Whatever the source, he is obviously excited to be on the Transylvania campus. It was the small class size and the caliber of students that drew him here. He also recognized that the students are engaged, both on and off campus. As he explains, they “consider themselves students and activists,” which helps him forge an instant connection with them.

Tompkins can’t wait to get in the classroom. “My favorite thing about teaching is when the students come in and they know absolutely nothing about a topic. And then they get really excited about it. Or, when a student resists a topic or subject in the beginning, but at the end of the term is suddenly a huge advocate for that issue.

“I love watching light bulbs go off. I love it when a student who has really struggled raises her hand and is able to explain a concept to the class.”

Tompkins knows he’s been successful when he sees his students develop a depth of understanding that allows them to teach their peers. He prefers to be a facilitator in the classroom rather than the guy running the show.  “I would rather help them construct their own class together. That allows them to focus on what they want to learn.”

2013. “‘There’s No Chasing Involved’: Cis/Trans Relationships, ‘Tranny Chasers’, and the Future of a Sex-Positive Trans Politics.” Critical Dialogue session at the Annual Meeting of the Society for the Study of Social Problems, New York NY, August 11.