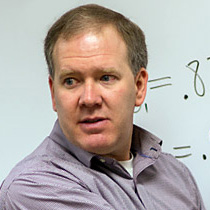 He has led several May term travel courses to places like Costa Rica and the Philippines. To improve his skills as a guide in Central America, he participated in a month-long Spanish immersion class in Costa Rica, where he stayed with a family that didn’t speak English and rode the bus to class every day. Now, when he takes students to Spanish-speaking areas, he’s not always reliant on a translator.

Bartley has recently led a service learning course in the Philippines, where students study the island nation’s history and culture, concentrating on questions of race and ethnicity. At times they live without air conditioning, taking showers out of buckets. They work with communities on Mactan Island, just south of Cebu City.

“We want students to see how others live. It’s still learning, so we have course objectives, but it’s more of a cooperative effort. Students can take leadership roles and take risks, because they don’t have to worry about failing the credit/no credit course.”

So what does all of this have to do with economics? Bartley is a “big believer in liberal arts.” He feels it’s important for students to have a lot of varied experiences. College is the time to learn about critical thinking and problem solving, and gain a theoretical foundation in economics. There will be time for specialization later, during graduate school, internships, or on the job.

As part of that philosophy, he encourages his students to pursue summer research projects and present their findings at the Kentucky Economic Association conference each October, where several Transylvania students have won the award for best student paper.

Not every economics student will be interested in research, however. Again, this is a time for trying new things. At the conference, “They can see how good they are. They can see other students from regional schools present and they can say, ‘Where am I compared to everyone else?’”

For those economics students interested in law—and nearly half of the university’s econ majors are—Bartley has another litmus test. His wife is an attorney at a large law firm in Lexington, where she serves on the committee that selects summer interns. When Bartley’s students are juniors or seniors, he invites them to a casual gathering at his house, where students can talk to his wife and learn about the skills and experiences law firms are looking for in potential employees.

And, finally, Bartley has some advice for those students simply looking for a quiet place to reflect on the world’s problems or contemplate the merits of a particular economic theory: don’t miss the fishing at nearby Cave Run Lake.