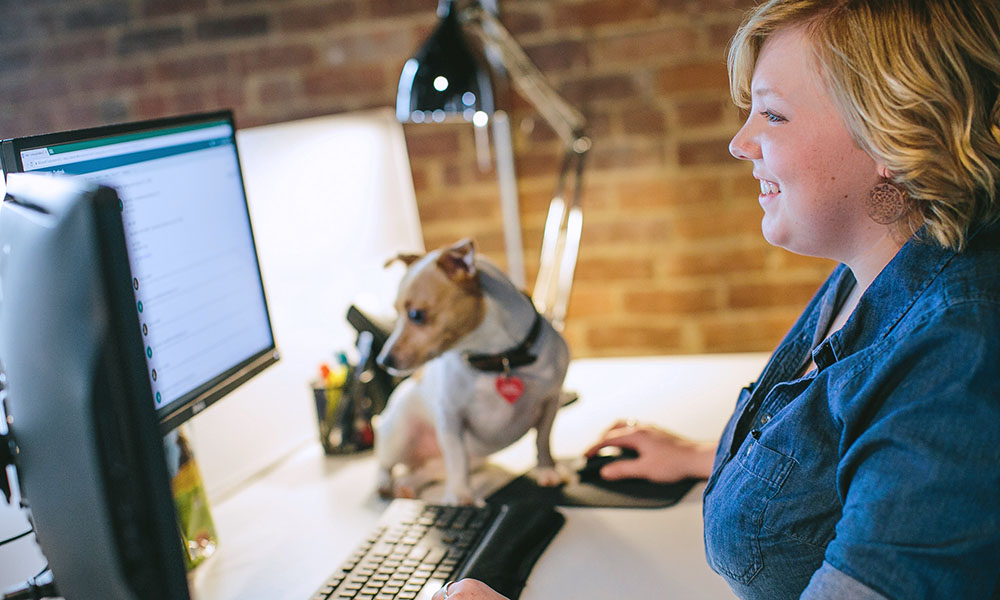 Lesley Goodaker interned in marketing at Spring & Sprout dental network. She based her senior seminar project on the work she'd done there. She invited the vice president of marketing and communications to be on her review panel.

But she still wasn't prepared for what happened during her presentation...

"To say that was a surprise would be an understatement," she says, "but it was incredibly exciting."

Lesley's study in her writing, rhetoric and communication major centered on rhetorical practices, but she was especially interested in incorporating digital technologies into her projects. So she worked with WRC professor Kerri Hauman to craft her curriculum to give her as much time in the Digital Arts Technology Lab (dArt lab) as possible, learning video and audio editing softwares and taking courses in digital rhetoric.

“To have faculty and staff that recognized the growth potential I had and pushed me toward that was indescribable.”"In my program, you could really pick and choose what you want to focus on," she says. "I had done several videos with Dr. Hauman in our Digital Rhetoric class, and it laid the foundation for technical skills. She made sure we were getting exposure to a lot of different tools."

She used her newfound expertise in her internship—which Hauman recommended to her—where she worked with a creative agency to gather all of the video and audio footage they had compiled and create videos that told stories about Spring & Sprout, establishing the organization's rich culture and the personal attention patients get from the dentists in the network.

She also worked with the management to come up with a career position that would be able to continue the work she had done there. Now she is a marketing manager, working with 70 offices in 10 states, helping to build relationships between offices and their patients. It was a young company, and she had freedom to experiment and craft a role that involved the interests she had developed at Transy, which were cultivated by her professors.

"To have faculty and staff that recognized my growth potential and pushed me toward that was indescribable," she says. "Transy offers an environment that helps you determine what kind of culture you want to be in. Having the tools like Career Development and resources like the dArt lab is such an asset to students who don't know how to hone their skills."