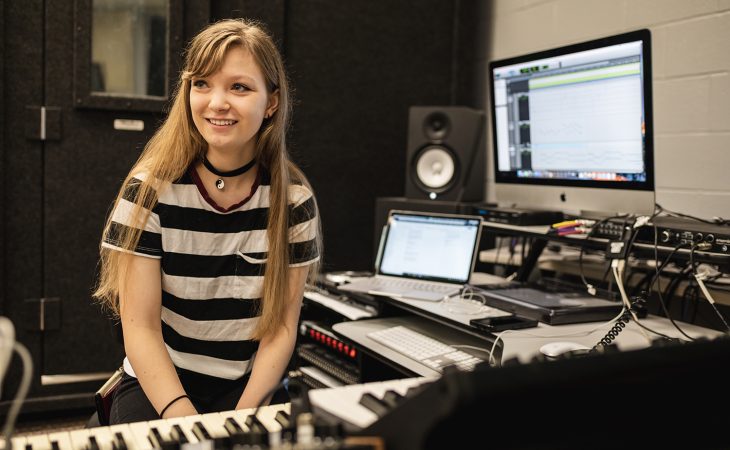 Emily Nance is plugged into the technology of making art this summer.

The Transylvania University rising senior is not only composing an original album on a MIDI keyboard in the school’s Digital Arts Technology Lab — but she’s also helping design new worlds as an intern at a local video game company.

At first she expected to focus solely on her album, which features a few of her fellow students singing along with her music. “I was planning on just finding an excuse to do this the entire summer,” she said, sitting in front of a keyboard and computer screens in the DArt Lab. The facility in the basement of the Mitchell Fine Arts Center is part of Transylvania’s Digital Liberal Arts initiative, which gives students access to cutting-edge technologies.

Nance ended up splitting her time between making music and making video games for Super Soul, a small, local company with a relaxed atmosphere. “They’re very helpful whenever I need anything,” she said.

This week she helped set up a “very cool” interactive art installation involving spring door stops and LED lights at the Living Arts and Science Center for RunJUmpDEv, a company associated with Super Soul.

Through her internship, she also got a crash course in video game animation. When creating characters for these games, she combines her artistic design skills with the technical logistics of making non-existent things move about in non-existent places. “That’s where it gets really fun,” she said. “I have to think: How on earth would this move? How would it attack? How would it run?”

A fan of fantasy games like “The Legend of Zelda,” Nance already knew she liked being absorbed in the alternate reality of digital worlds. Now she helps create them.

Nance hadn’t planned on going into game design, “but after this internship I kind of think I would,” she said. “It’s really fun. I’m doing a lot of animations for their video games — and I’ve been learning a ton.”