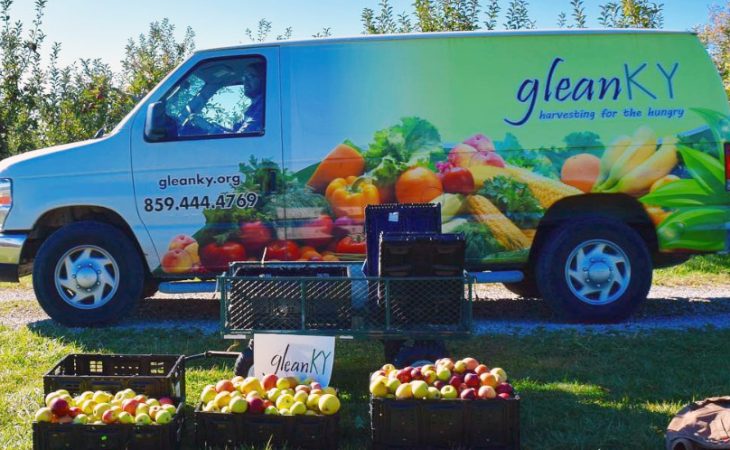 Erica Horn ’83: How we transmute the insurmountable

“Are people hungry in Lexington?” someone once asked Lexington native Erica Horn ’83.

In fact, people are hungry throughout the Commonwealth: One in six of all Kentuckians and one in five of children are “food insecure.” According to Feeding America, that adds up to 699,590 people, of which 202,050 are children.

How is such a problem resolved? How can hundreds of thousands of mouths be fed with anything less than a miracle involving fishes and loaves? How can the 40 percent of food that is wasted in America be redeemed?

Or, in Pioneer speak, “What are you going to do about it?”

There’s a big difference between recognizing two monstrous problems—hunger and food waste—and helping to resolve them on a grand scale in your own community.

Throughout Horn’s career and decades of intense community service, she has learned to respond to giant questions much as David felled Goliath—with faith and the right tool. She breaks the challenge down into components, researches elements that worked in other communities, identifies the basic processes and unites the partners needed to arrive at what, in hindsight, appears to be forehead-smackingly doable. The efficiency and purity of the construction begs the question: How is it that we, as a civilization, didn’t do this sooner?

As a lawyer and CPA, Horn says, “It’s natural for me to create structure. No one would like that more than me.” But finding solutions demands more than structure. Horn brings devotion, creativity and generosity, and puts the ego aside.

On top of a demanding job, currently as associate director of tax services at Dean Dorton, Horn has led statewide boards and started a learning center and a community garden at her church, Beaumont Presbyterian. The garden became the starting point for Faith Feeds, the origin of GleanKY.

“I knew nothing about vegetables,” she remembers. “I knew nothing about growing anything, but I knew that I could put a group of people together, divide a piece of property into squares and sign people up. It’s really a matter then of deploying your people, your assets,” she says of the flourishing community garden that first drew the attention of a local gardener and gleaner, John Walker.

Inspired by the bounty of his own garden, which could feed his family, friends and co-workers and still have plenty for others, Walker was also living out the Old Testament tradition that calls on farmers to leave the edges and viable remnants of their harvest for the good of the poor, strangers and widows. John Walker approached Erica Horn with the idea of engaging the church and other community gardeners to become active gleaners and to provide excess produce to people in need.

They began by approaching a farmers market and organizing volunteers to deliver unsold food to shelters and emergency food services in Lexington. By the end of their first year, as their annual report details, 40 volunteers delivered 37,561 pounds to 14 agencies and ministries.

Just as GleanKY became the link between those producing the food and those preparing food for the hungry, Horn served as the linchpin for John Walker’s idea and bringing that idea to fruition.

“One of the gifts that God has given me,” she acknowledges, “is I can take a really good idea like John’s and, with help, make it happen.” She recognized its value and the consequences of not getting involved. “I knew if someone didn’t take the lead, it wouldn’t happen.”

From the very start, GleanKY was structured to tap into people’s strengths and to be a collaboration of multiple faith groups. And, as the organization has grown to reach beyond Lexington, its model consciously adapts to accommodate the varying environments of Kentucky counties; not every county has a farmers market or a Costco.

Horn is determined to make GleanKY a sustainable enterprise. Her tenacity, work ethic and talent for strategy, action and long-range thinking have been acknowledged in an award from the Kentucky Nonprofit Network. And although the seeds of her motivation to serve may have been planted in her childhood during Sunday school, she notes that “Transy was the place to help grow my abilities to execute, lead and learn the importance of knowing other people.”

As she assesses the state of the world, she concludes, “We’re in short supply of leadership, but at Transy you see a lot of movers and shakers. These students care and want to make a difference.” She adds, “Transy gives you a place to start and the confidence that you can.”

This article originally appeared in the spring/summer 2018 issue of Third & Broadway.