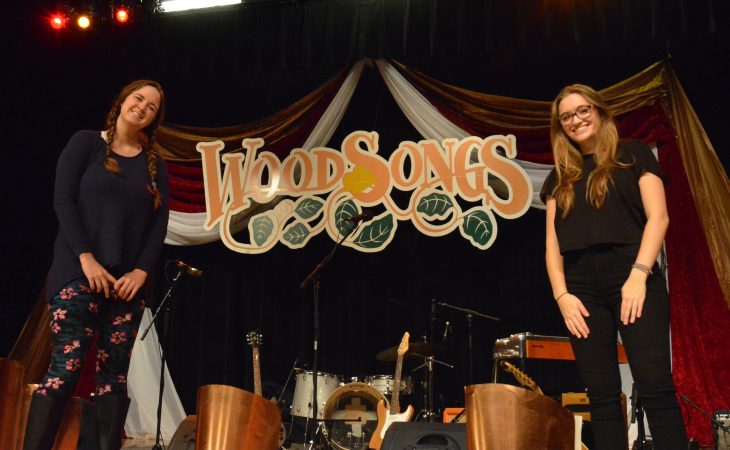 From the musicians to the production assistants, no one involved with the WoodSongs Old-Time Radio Hour gets paid. They are driven by not only a passion for music, but also a camaraderie that creates a welcoming learning environment for their student workers.

“It’s a really supportive community of volunteers,” said Taylor Mahlinger, a junior at Transylvania University. She and Transy senior Jenna Soderling spend their Monday evenings at the Lyric Theatre and Cultural Arts Center helping produce the show, which airs on 537 radio stations across the globe.

Mahlinger said when she first started at WoodSongs at the beginning of the fall term, she wasn’t sure what to expect—considering all the technical things that go into producing a radio show (one that’s in front of a live audience, no less). “Sometimes when you come into those situations, people get really frustrated.” But instead she found volunteers who were patient and easy to work with. “It’s an awesome experience,” she said. “Everyone is really nice. It’s not a high-pressure atmosphere.”

In addition to helping set up for the show—running cables, helping hoist the WoodSongs sign over the stage, and whatnot—Mahlinger runs a camera for an online live stream and Kentucky Educational Television broadcast. “It’s pretty fun,” she said. “I really enjoy camerawork.” She’d never done that before.

Mahlinger, who is a writing, rhetoric, and communication major minoring in music performance, hopes to someday go into music journalism, so this is valuable experience for her—especially what she learns from watching interviews of the musicians between sets.

Hosted by folk singer Michael Johnathon, WoodSongs is “a celebration of grassroots music and the artists who make it,” according to its website. However, it features a variety of genres besides folk and bluegrass.

“You never know who’s going to come through there,” Mahlinger said. Past performers have included Australian virtuoso guitarist Tommy Emmanuel and Chris Stills, the son of Stephen Stills from Crosby, Stills & Nash.

This chance to meet world-class musicians while getting hands-on experience is located less than a half mile down Third Street from campus. “It’s not every day that there’s an opportunity like this right down the road,” Mahlinger said.

A music technology major, Soderling is especially interested in working on the audio side of things. “Learning the soundboard is going to be valuable,” she said. “That skill transcends past live shows—it can apply to mixing your own stuff.”

She’s also learning about lighting and camerawork. These are not her main interests, but she keeps an open mind. “You don’t really know what skills you have that are going to be valuable until you need them,” she said. “It’s like weird trivia that’s in the back of your head and you don’t really need it until you’re at trivia night.”

Soderling, who is minoring Spanish and digital arts and media, said she isn’t sure of her career path yet—but she loves music and might work at a studio.

She and Mahlinger learned about the WoodSongs opportunity from Associate Professor of Music Timothy Polashek, who was contacted by WoodSongs about potential student volunteers.

“Because of the vibrant artistic and musical activities both on and off campus, including WoodSongs, music students at Transylvania receive a comprehensive education with the freedom and support to develop their unique artistic voices in opera, jazz, bluegrass, musical theater, electronic dance music, multimedia, or wherever their passions lead them,” Polashek said. “Jenna and Taylor are wonderful in that they are both extremely creative and curious musicians, hardworking, love to collaborate and are taking maximal advantage of all these opportunities.”

Bryan Klausing, a production manager/intern coordinator at WoodSongs, said working for the show is a terrific and uncommon opportunity for student volunteers. And it’s very direct experience—right off the bat. “We’ve had students come in and within the day they’re running cameras for a national-level broadcast.”

The students learn from the established volunteers, who bond with them over a love of music. “We have a great mentoring and teaching philosophy here at the show,” Klausing said.